Welcome to One Word Suggestion.

Most people think improv is just for comedy or jazz music. But, really, it’s a tool for life. For each article in this series I use a single word, suggested by you, as a leaping off point to explore how having an improvisational mindset will help you perform at a higher level, both personally and professionally, whether you have a career on or off the stage.

This week’s word, “ensemble” was suggested by Jonathan.

It represents so much of what we believe in, and teach and live at LMA – at both the school and our corporate training arm.

In Kelly Leonard and Tom Yorton’s great book, “Yes, and” they write about using the word “ensemble” instead of “team” because they think “team” is too loaded – often equated with lousy team building experiences or associated with competition, where one group wins and another loses. Ensemble, by contrast, implies cooperation, collaboration, and unconditional support. 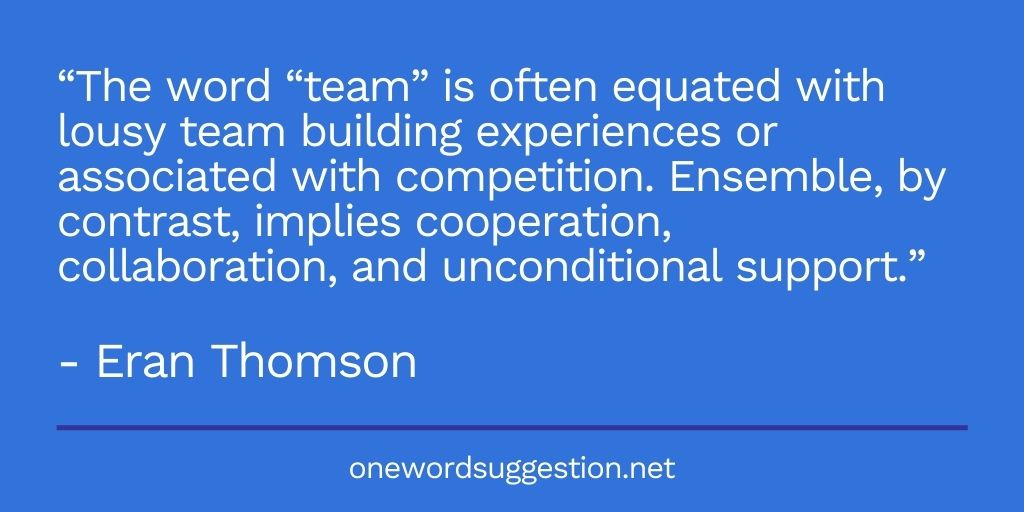 And the “ensemble philosophy” is one of the fundamental differences between short form improv like Whose Line is it Anyway, Thank God You’re Here, or TheatreSports – and long-form improv which what our school and business are built on.

Those shows are all fun to watch, and fun to be in, but if you pay close attention you’ll see that everyone is trying to be funnier than each other, and be their own star – and it’s often competitive.

Long-form, on the other hand, is all about being collaborative. My only job as part of an ensemble is to have your, and everyone else’s back, And their job is to have mine. And together we validate each other’s choices, ideas and actions and make them make sense.

The whole idea is that when you make others look good, you look good.

My favourite story that beautifully exemplifies the idea of the ensemble came from one of our Teachers Sophie Long.

She was in Chicago, the birthplace of improv, doing some training. And at the end of her course, they had a grad show.

Now the theatre they were performing in had entrances to the stage from the left and the right and they decided as a group to enter one at a time from alternating sides of the stage and meet in the middle in a line to start their show.

But the first guy to run out slipped and fell and banged his chin on the stage and the audience gasped in horror. So what do you think Sophie and her team did next?

They all ran out, one at a time, falling even bigger and more crazily than the last until they were in a big pile and the audience were on their feet giving them applause – and they hadn’t even started the show.

This was not the plan. But they did what every great improviser knows how to do: react, adapt and communicate.

On stage or in everyday life – using the tools of improv when the unexpected happens can help you win. And having an ensemble you can trust to have your back is gold.

So to me, ensemble is about a group of people working together and supporting each other to achieve their best. To make each other look good, and serve something bigger than just themselves.

But the best definition of “ensemble” I ever heard was a poem attributed to Muhammad Ali and it goes like this:

So that’s my take on ensemble. Thanks for the great suggestion, Jonathan.

Listen to the podcast version of this article below or wherever you find podcasts.

If you want to suggest a word for next week, or add your perspective, drop me a note in the comments or in a review. I’m making one of these every week, for a year, so definitely subscribe, like, share, and all that jazz.

Or better yet, listen to the podcast.

And in the meantime, if you’re interested in improv for personal growth, professional achievement, or just for fun, my suggestion is to get yourself into an improv class or book a corporate training workshop for your team.

About One Word Suggestion

The One Word Suggestion series is your personal toolbox full of ways to help you use the power of improvisation to craft a more mindful and meaningful existence. Available as articles, a podcast, and soon, a book filled with powerful exercises for teams.

The One Word Suggestion Podcast with Eran Thomson

In each 3-minute episode, Eran uses a single word, suggested by listeners, as a leaping off point to explore how developing an improvisational mindset will help you perform at a higher level personally and professionally.

Whether you aspire to be better on stage or on the job, this quick hit of improv inspiration is sure to bring you some insights, perspective, and joy.

Like what you hear? Listen to Eran’s guest appearances on other people’s podcasts, or invite him to speak at your next event.

Learn about the best improv training for teams at PowerProv. 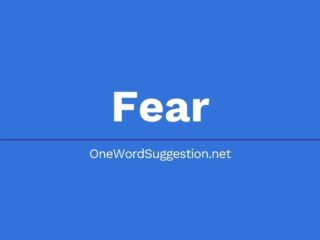 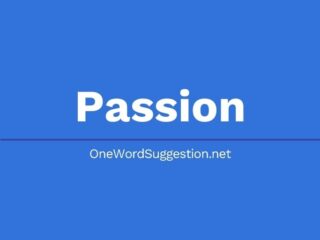